The Corn Exchange in Rochester was the glamorous venue for the very first Kent Charity Awards on the 19th March. The event sponsors – Furley Page, The KM Media Group, Kent Reliance, Medway Council, MidKent College, Kent County Council, Kreston Reeves , Southern Water and Diggerland – had already narrowed it down from around 160 entries to just eighteen finalists, who were then asked to describe what they do, why they do it and what it would mean to win, before being interviewed by the judges.

Hosted by BBC South East Today presenter Rob Smith, the Awards celebrated the fantastic work done by the county’s charities in general and the finalists in particular. A drinks reception was followed by an excellent three-course meal provided by MidKent College catering students, with entertainment from a very good local magician. 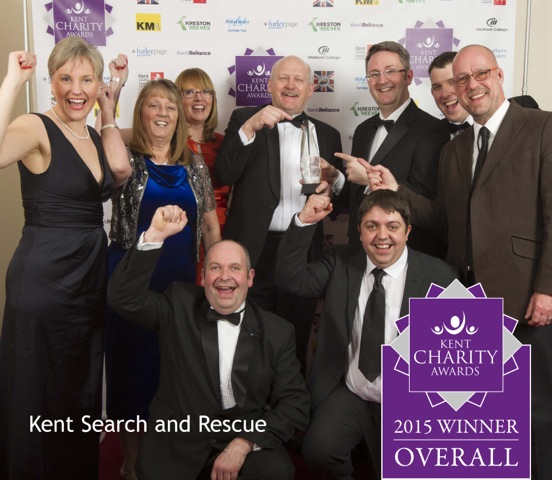 After dinner it was down to the evening’s business. The finalists were divided into six groups – Heritage & Environment, Voluntary, Animal, Care, Children’s and Community – and each was presented with a framed certificate for reaching the final. The group winners were then announced and invited back onto stage to receive another certificate, a beautiful glass trophy and a cheque for £100. After a few minutes of cheering and congratulations, it was time for one of the six group winners to be crowned the overall winner. Our host announced “…and the Kent Charity of the Year, 2015, is…Kent Search & Rescue!” Off we went to collect our third certificate, our second trophy and our second cheque, this time for £500. Much applause, cheering and hand-shaking were followed by speeches, photographs and interviews, then back to the bar to celebrate.

The whole evening ran without a hitch, thanks to the organisational skills of the KCA’s founders, Sarah MacDonald and Jo Hage. For everyone at Kent Search & Rescue it was a great achievement to win but, more importantly, it recognises the efforts of our volunteers to help vulnerable people in their hour of need. Respect for the privacy of the missing person means that our work often remains unnoticed by the general public, but this award will certainly help to raise our profile, generate vital funding and attract new volunteers.